The background of the research group is a decade of pioneering development of the field of atomic resolution dynamic scanning force imaging (NC-AFM) on insulating surfaces and nanostructures. Imaging an insulating surface and defects with atomic resolution was first demonstrated in 1999 for isolated hydroxyl groups incorporated into the CaF2(111) surface. In closest cooperation with theoretical physicists, the technique has then been developed into a quantitative tool for atomic resolution analysis of insulators. Atomic resolution imaging on a truly insulating oxide has first been demonstrated for Al2O2(0001) where also the self-organised formation of regular hydroxide nanostructure was discovered. Atomic resolution studies revealing important surface structural have meanwhile been presented for various oxide surfaces with an emphasis on CeO2(111) and ZnO(0001).

Presently the group pushes forward the atomic scale investigation of defects on oxide surfaces and chemical reactions relevant in the context of chemical catalysis. Another strand of research is the highest resolution imaging of organic molecules and molecular assemblies on insulating surfaces for the development of molecular electronics/spintronics. These activities had been embedded in the single molecules programme of the VolkswagenStiftung as well as the EU FP6 IP PicoInside and are now pursued in the project on spin quantum computing also funded by the VolkswagenStiftung. These activities also greatly benefit from the capability of measuring the electronic structure of delicate insulator and molecular surfaces with MIES that has recently been established in our group. A third line of activities is the further development of molecular manipulation with the force microscope that had been started in the EU FP6 STREP NanoMan. We are also strongly involved in technical developments pushing the experimental capabilities of our force microscopes to the physical limits.

We lay the groundwork for a truly scalable solid-state quantum computer based on molecular spin qubits in paramagnetic endohedral fullerenes (PEF) that are optically read out via pulsed optically detected magnetic resonance of shallow nitrogen vacancy centres (NVC) in diamond. A fundamental demonstration of the atomic scale engineering principles and the read-out scheme is targeted. Work is focused on achievements necessary for the construction of a demonstrator device: Positioning PEF atop NVC, demonstrating spin-spin coupling of the PEF with the NVC and the evaluation of the coherence time in the spin systems. 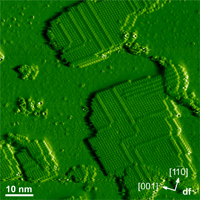 Growth of ordered C60 islands on TiO2(110)
cooperation with A. Kühnle (Universität Osnabrück)

We study C60 molecules deposited on the rutile TiO2(110) surface in situ at room temperature. At sub-monolayer coverages, molecules adsorb preferentially at substrate step edges. Upon increasing coverage, ordered islands grow from the decorated step edges onto the lower terraces. Molecules arrange themselves in a cantered rectangular superstructure, with the molecules lying cantered in the troughs formed by the bridging oxygen rows. Although the TiO2(110) surface exhibits a high density of surface defects, the observed C60 islands are of high order. Slightly protruding C60 strands on the islands are attributed to anti-phase boundaries due to stacking faults resulting from two islands growing together. 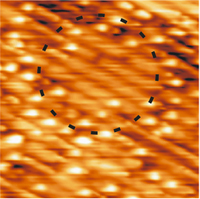 The stabilization of polar oxide surfaces is of fundamental interest for understanding many processes in surface chemistry. We study the zinc-terminated Zn-ZnO(0001), a surface important in heterogeneous catalysis. While most of the surface morphology is dominated by a phase consisting of triangular shaped nanostructures, we observe a coexisting (1 x 3) reconstructed phase where the reconstruction is ascribed to the formation of missing Zn-rows. We provide evidence that the instability of the polar Zn-ZnO(0001) surface can be cancelled by a reduction of the surface charge by 1/3 which is considerably larger than the value of 1/4 derived from a simple ionic model for polar stabilization. 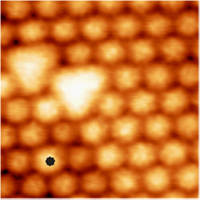 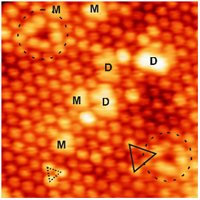 Surface and subsurface oxygen vacancies on the slightly reduced CeO2(111) surface are clearly identified by the comparison of the observed topographic features with the corresponding structures predicted from recent first-principles calculations. By combining two simultaneously acquired signals, we are able to unambiguously locate subsurface oxygen vacancies buried at the third surface atomic layer. We found evidence of local ordering of these subsurface defects suggesting a delicate balance between subtle interactions among adjacent subsurface oxygen vacancy structures. With a similar methodology, we aim for an identification of OH defects and Ce3+ ions in (near)surface layers. 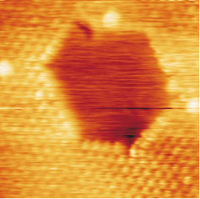 The morphology of step structures on CeO2(111) and contrast formation in dynamic SFM on this surface is studied. The surface exhibits hexagonal islands and pits of O–Ce–O triple layer height. The (111) surface almost exclusively exhibits alternating steps having (110) and (001) facets. Kink sites and missing oxygen atoms at step edges are identified to be the dominating defective sites at step edges. It is demonstrated that low coordinated oxygen atoms at step edges can be removed by the scanning SFM tip. An empirical model has been developed explaining contrast formation by the interaction of a hydroxylated probe with the surface. 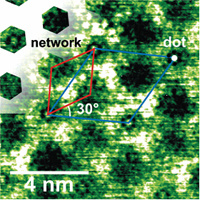 An extraordinarily well ordered substrate with a 4.2 nm template periodicity is an alumina film grown on Ni3Al(111) that can readily be prepared exhibiting a dot and a network superstructure. By imaging the alumina surface with NC AFM, we reveal that the main structural element of the oxide film is a lattice of hexagons with a 0.29 nm side length that is pinned to the 0.51 nm periodicity of the substrate. The surface unit cell is defined by distinguished sites forming the dot structure. Pinning the oxide film to the substrate furthermore results in a honeycomb-like topographic modulation referred to as the network structure. 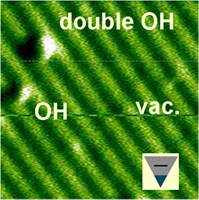 We demonstrate how to extract detailed information about defects and the chemical identity of adsorbates on a metal oxide surface from NC-AFM images. We make use of the observation that the apex of the AFM tip can have different chemical composition. Complementary sets of images recorded with different tip terminations unambiguously define the ionic sub-lattices and reveal the exact positions of oxygen vacancies. hydroxyl defects and other structure on the TiO2(110) surface in great detail. Chemical specificity is extracted by comparing the characteristic contrast patterns of the defects with results from comprehensive AFM simulations. 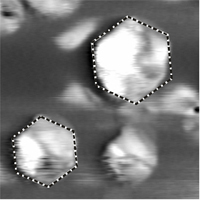 We investigate the morphology, dispersion, and thermal stability of nanometre-sized three-dimensional Cu clusters on α-Al2O3(0001) and study the effect of surface hydroxylation by depositing metallic Cu either on an ultrahigh vacuum prepared Al-terminated alumina surface or on surfaces pre-hydroxylated/hydrated by exposure to water. Three-dimensional growth of Cu nanoclusters dispersed evenly on the surface is observed independent of surface preparation. Nanoclusters appear as regular Cu crystallites in the equilibrium form. For strong hydroxylation, a reduced aspect ratio of the clusters indicates an increased wetting of the Cu. 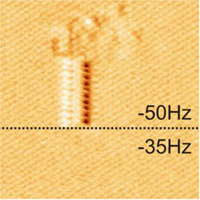 Manipulation of water species on CaF2(111)
cooperation with A. Foster (Tampere University, Finland) and A. Shluger (UC London; UK)

We demonstrate lateral manipulation of defects occupying single ionic sites on a calcium fluoride (111)-surface. Defects stem from the interaction of the residual gas with the surface. Manipulation is performed over a wide range of path lengths ranging from tens of nanometres down to a few lattice constants. We introduce a simple manipulation protocol based on line-by-line scanning and record the cantilever resonance frequency detuning as a function of the manipulation pathway in real time. Recent simulations of the manipulation process reveal that water above surface defects is manipulated together with the defect. 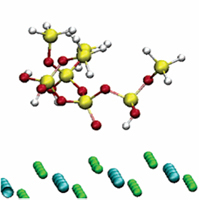 We use the CaF2(111) surface, where atomic resolution force microscopy has allowed identification of the positions of the Ca2+ and F- ions, to demonstrate that short-range interaction forces can be measured selectively above chemically identified surface sites. Combining experimental and theoretical results allows a quantification of the strength and distance dependence of the interaction of a tip-terminating cluster with particular surface ions and reveals details of cluster and surface relaxation. Imaging with a neutral tip reveals topography and strong local charging at step edges while imaging with a charged tip exhibits subtle contrast features resulting beneath the surface of flat terraces.